Hello guys!
Today we are at Pontevecchio, a location halfway between Rorà and to Luserna San Giovanni in Pellice Valley; it takes its name from the bridge built over the river Luserna (the Englich for “Pontevecchio” is “Old Bridge”).
This place is (sadly) known because of a bloody battle which took place here on 1944, 21st March, at partisans’ time… But the story I’m about to tell you is even older! 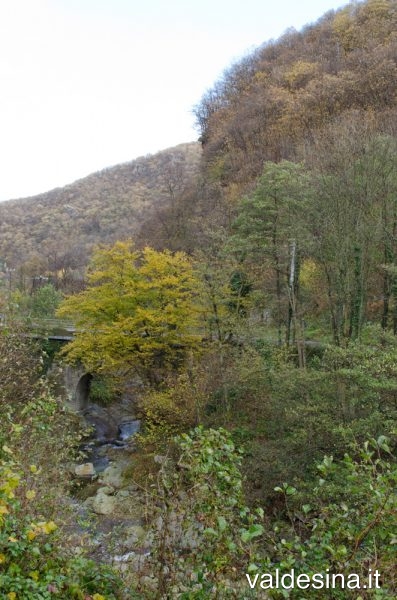 As you know, in these Valleys not only the most famous known battles were fought… For many years Waldensians and Catholics competed for these places in the name of religion.
Our story takes place in this mood of religious persecution of Waldensian heretics by Calabrian and Spanish soldiers, on the payroll of Savoy catholics.
One day some soldiers saw a young shepherdess and decided to catch her, because she was really very cute. The girl had already noticed those men and she had realized the danger he was running. Therefore, without any hesitation, she took refuge among the trees to escape them. But those brutes followed her.

The young girl ran through the woods she knew well, and moved straight towards the rock we can see from the stone bridge, determined to throw herself in the river off the cliff rather than being captured!
It did not take long to the soldiers to find the girl, and, since she had no toher way to escape, she jumped into the void…

Don’t worry, kids! …because in that moment there came a breeze which became more and more forceful… and the wind puffed the shepherdess’ clothes as she was falling down the rock, and, with her skirt inflated with air, she gently glided on the surface of the stream.

As soon as she reached one of the rocks cropping off the water, she got to the opposite bank of the river in four graceful jumps and ran through the woods, reaching a safe place for herself.
The girls’ chasers stared at what happened with mouth open from top of the rock… and I guess they never explained themselves such a phenomenon!!!

How to get here:
move from the center of Luserna San Giovanni (Turin) and get the Provincial Road number 162 towards Rorà. After just over 3.5 km on your right you will see signs for the village Mugniva just on the bridge.